Shaki, located in a picturesque mountainous region of Azerbaijan, 380 km west of Baku, has an ancient history dating back about 2500 years. It has preserved many historical sights, a special place among which is occupied by the Shaki Khans’ Palace, one of the best examples of Azerbaijani architecture.

Residents of Shaki are hospitable and cheerful people by nature, and local humor has long become the talk of the town: Shaki is even a sister city of the famous Gabrovo city in Bulgaria. Shaki is also a large craft center. Here you can buy silk products – scarves, shawls, carpets, jewelry and engraved products of local craftsmen. The city is famous for its excellent sweets – halvah and bamiya.

Take a tour of the surroundings

The city of Shaki is located on the spurs of the Caucasus Mountains. Its surrounding nature is distinguished by its exceptional scenic beauty: heavily crossed relief and wooded mountains alternate with valleys of bizarrely meandering rivers, one of which is Gurdzhanachai. The city territory stretches along this river, which divides the Shaki into two parts.

Modern Shaki is immersed in an array of green spaces, with houses and architectural structures peering out from behind trees. This peculiarity of the city is determined not only by the topography of the area, but also by the peculiarities of the planning, organically linked with nature. Almost every house is surrounded by a garden and a fence made of river stone – the traditional building and finishing material for these places. Another distinctive feature of the Shaki structures is the red tile made from baked clay. Some roofs have darkened with time, however, it is considered that it is enough to disassemble the tiles once every 20-30 years, wash them, and the roof is again like new!

Another feature of Shaki that catches the eye when visiting the city is its tidiness. The streets are fairly clean and, even in bad weather, there is almost no slush, which is often observed in other provincial cities.

The urban area itself is conditionally divided into two parts. At the top is Shaki fortress, commercial buildings, hotels and public buildings, and the lower part is occupied mainly by residential buildings. 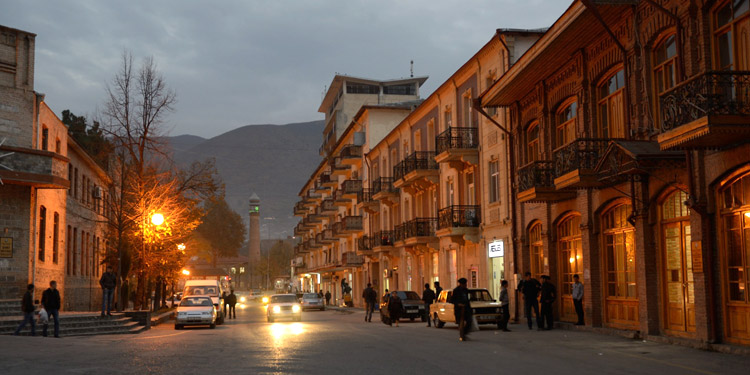 Visit the Palace of Shaki khans

Located in the upper northeastern elevated part of the city, the Shaki fortress was built during the reign of the first Shaki khan, Haji Chelebi (1743-1755). The fortress is a Khan’s citadel, which does not contain city-wide structures. Inside the fortress in different periods there were many buildings, the number of which reached forty, and the Khan’s palace was the main among them.

The Khan Palace is an outstanding work of medieval architecture of Azerbaijan. The Palace of Shaki Khans, unique in architecture, was built in 1762 by Huseyn Khan. The palace has its own special original construction techniques. It is enough to point out, for example, that every square meter of shebeke (windows made of small wooden parts with colored glass filling them) consists of five thousand parts interconnected without using nails. Many kinds of applied arts of the 18th-19th centuries were synthesized in the palace. The openwork interior doors and fireplaces in the halls of the palace attract attention.

In front of the main facade of the palace two old plane trees (Chinara) rise. The height of each of the trees exceeds 30 meters. Planes were planted here in 1530, that is, long before the construction of the palace itself.

Interestingly, the Palace of the Shaki khans, apparently, was a summer palace-pavilion, and the building that served as a winter palace did not survive.

Nowadays, the monument of architecture has been carefully restored and protected by the state. Sensors and equipment are installed in the rooms of the palace to maintain temperature, and a certain level of humidity. Note also that photo and video inside the palace is prohibited. 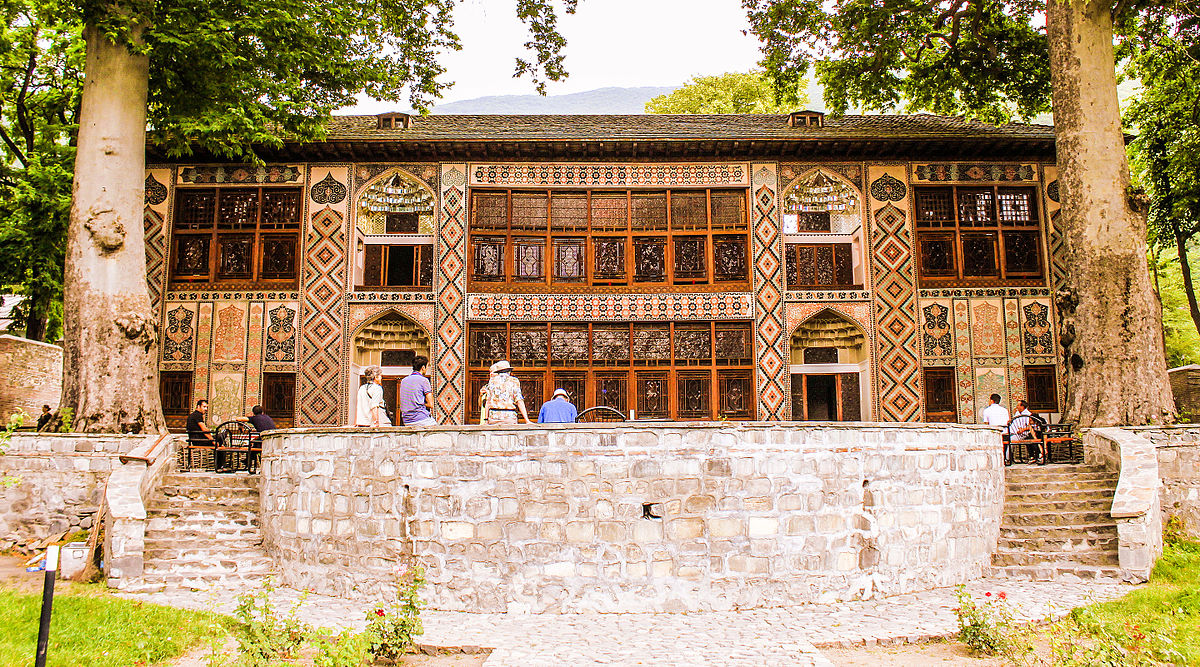 Visit the House of Shekikhanovs

Built in the 18th century, the House of the Shaki khans represents a transitional link from the people’s dwellings to palace-type houses. A rectangular two-storey building retains all the features of Shaki folk dwelling, and at the same time, the wealth of decorative elements, mainly in the interior, approaches the structures of a palace character.

Each floor of the house consists of 3 rooms and two small lobbies. The interiors are richly decorated with colored shebeke, made by the same craftsmen that decorated the Palace of Shaki khans. Pouring through colored Venetian glass, light creates a bizarre play of colors and glare on the walls, the ceiling and on the floor.

The professional guides working here will guide those who wish in all halls of the house, and will tell its entertaining story. 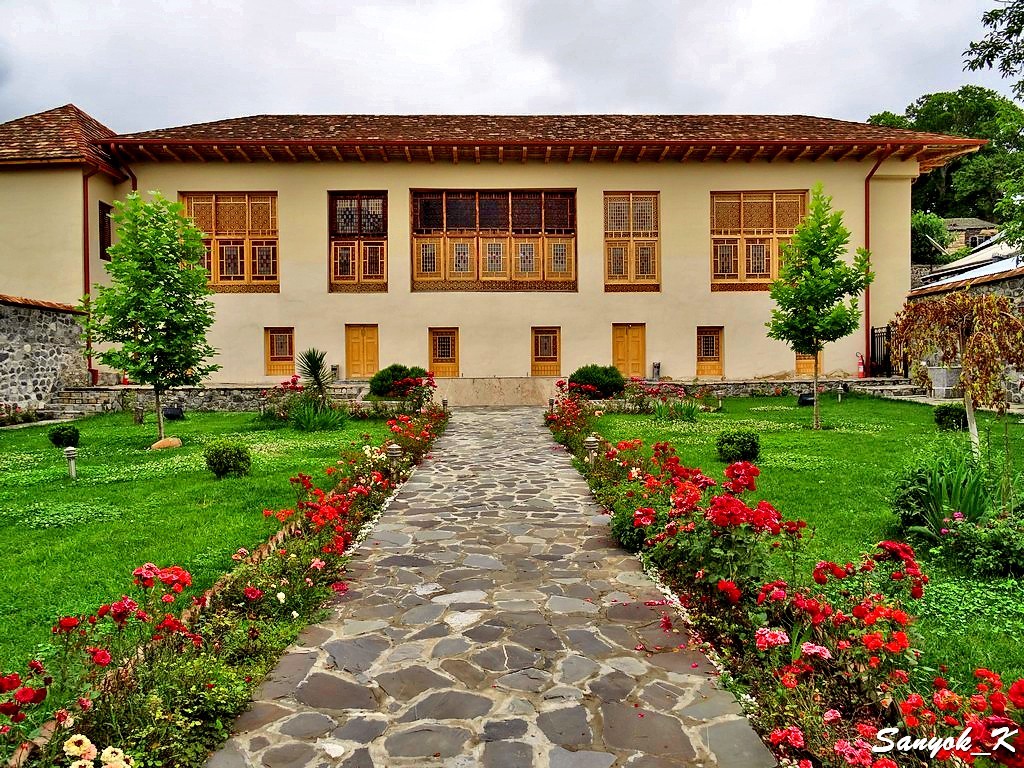 Peek into the shebeke workshop

Shebeke, similar to what can be seen in the Shaki Khan Palace and the House of Shekikhanovs, is still being done in Shaki until now – the workshop for their production is located not far from the palace.

Shebeke is often compared to European stained glass windows. In the manufacture of shebeke used bars and slats of hardwood – boxwood, walnut, beech and oak. The process of designing and manufacturing shebeke is quite complicated. One square meter of shebeke can contain 5,000 pieces of glass, maybe more, up to 14,000.

In the shebeke workshop, anyone can buy shebeke lamps, small shebeke souvenirs, and other stylized products. 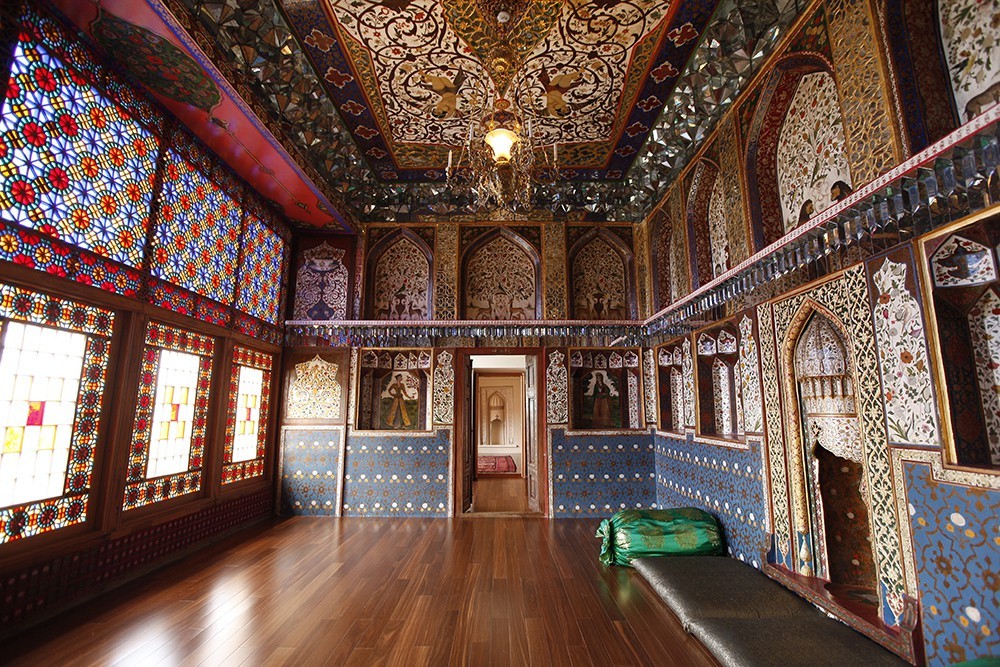 The house, in which Mirza Fatali Akhundov, the founder of Azerbaijani drama, was born in 1812, is more than 200 years old. The writer and thinker spent his childhood years in this house. In 1937, a museum was created here, in which personal belongings of M. F. Akhundov, his mother, family, household belongings and household items of that era are stored.

Next to the house of M. F. Akhundov there is a spacious exhibition hall where you can familiarize yourself with the writer’s work. Here are books, documents, manuscripts, pieces of furniture, in particular M. Akhundov’s desk, and other historical evidence from the life of a prominent Azerbaijani playwright. 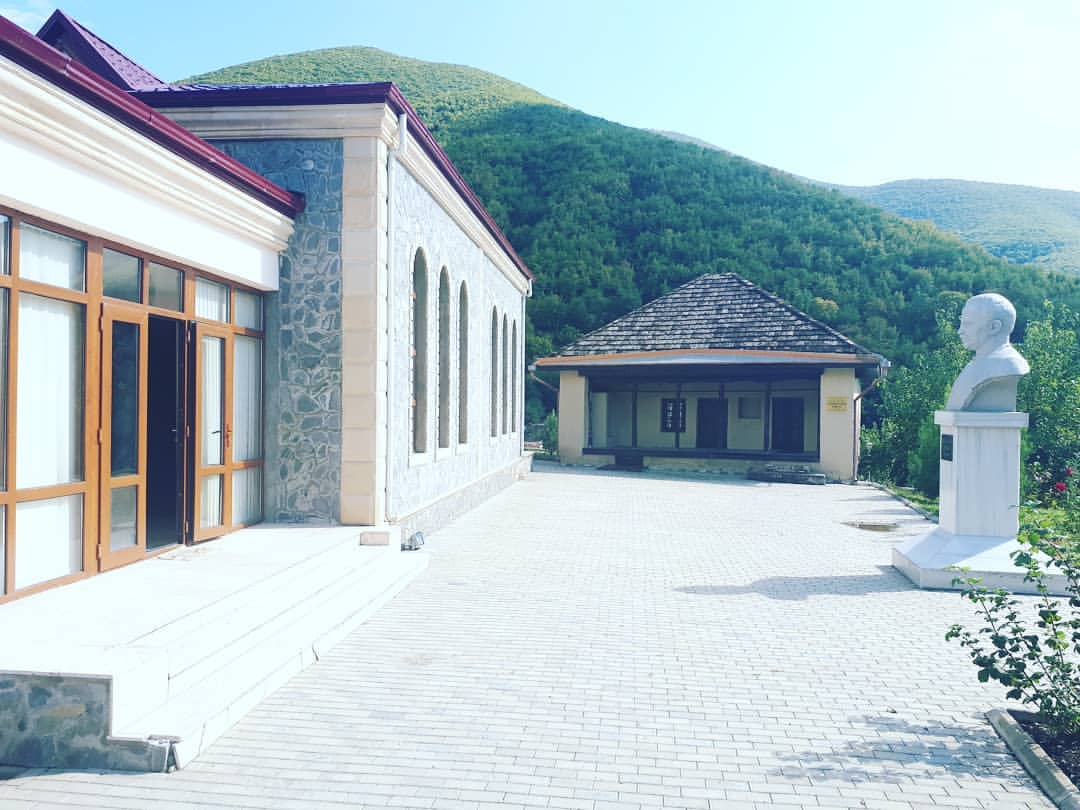 Climb to the Gelersen-Gerersen fortress

One of the most famous historical sites of Shaki – Gelersen-Gerersen Fortress (“Come-See”) is located on a strategically advantageous site, about 4 km north of the city, on the left bank of the upper flow of the Kish River, on top of the Garatepe Mountain. It is believed that the foundation for the construction of the fortress was laid in the 15th century by the Shaki ruler Alijan.

The name of the fortress is associated with the invasion of the ruler of Iran, Nadir Shah. In 1743, taking advantage of the people’s discontent with the Iranian oppression, the local ruler Haji Chelebi, declaring himself Khan of Shaki, took refuge in this fortress and rejected Nadir Shah’s demands for deposition. The enraged shah, according to popular legend, demanded to know the reason why Chelebi does not give up. Haji Chelebi, confident of the impregnability of the fortress, said to the shah, “Come and see.” Indeed, in 1744, Nadir Shah arrives in Shaki with a huge army, approaches the fortress, but, failing to subdue it, returns. After this event, the name of the fortress Gelersen-Gerersen was established in the people.

Currently, the fortress is a popular place among tourists coming to Shaki. 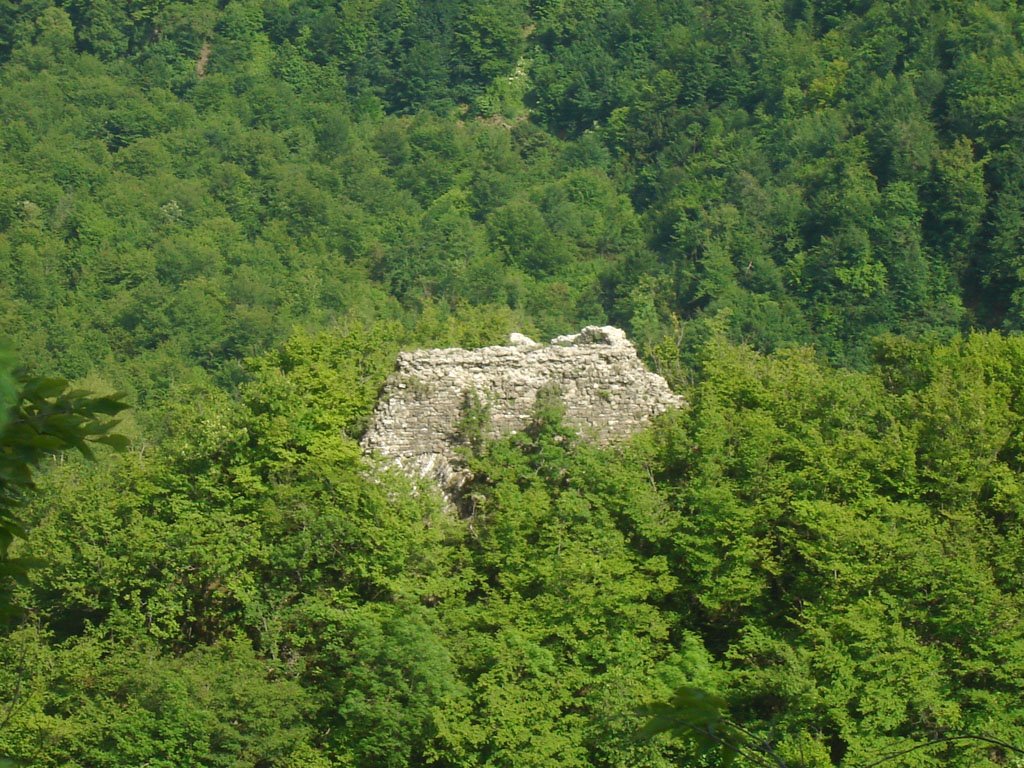 The territory of Azerbaijan has always been considered the most important transit point of the Silk Road. And Shaki – a major craft center located on the route of the Great Silk Road has long been famous for its silks. Since the 15th century, this Azerbaijani city is known as a place of production of excellent silk and the center of silk production of the whole Caucasus. There is a large silk factory, as well as silk-spinning and silk weaving factories, built in 1861. And in 1862, at the international exhibition in London, Shaki silk was awarded a gold medal.

At the “Shaki-Ipek” plant, today, classic silk fabrics – crepe-chiffons, atlases, finished goods – scarves, kalagai shawls, carpets and handmade souvenirs are woven. In the production of fabrics used only natural dyes and threads. Carpets are also woven by hand. The most popular products can be purchased at the company store – Shaki-Ipek Trading House. 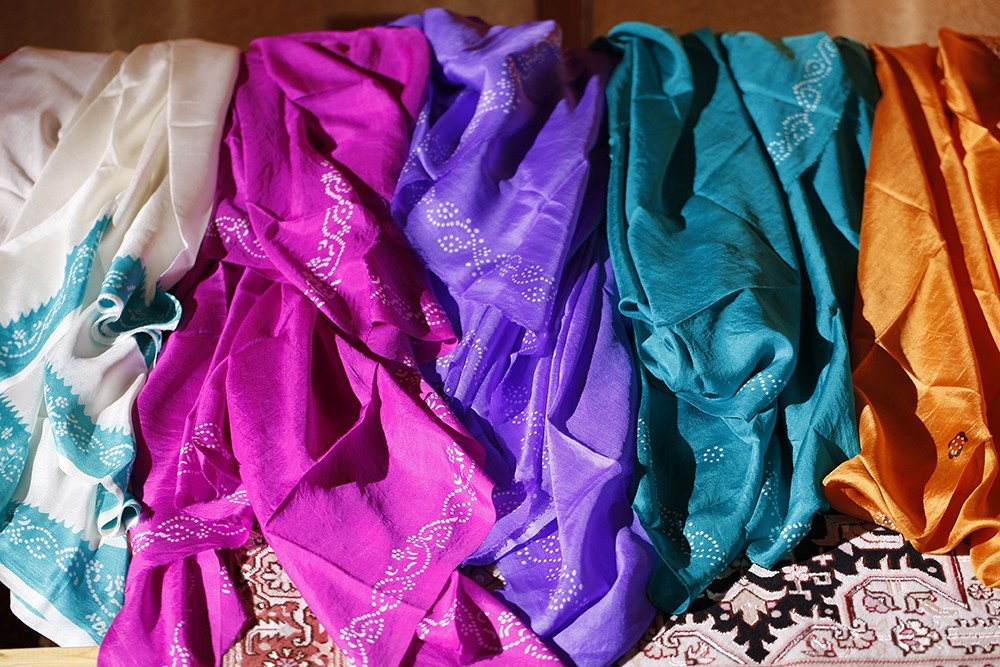 No wonder many tourist guides call Shaki the gastronomic capital of Azerbaijan. It is this ancient land that is the birthplace of a delicious rich soup – piti. This fragrant soup languishes in clay pots in the oven for at least 8 hours. Shaki piti – as well as all in Shaki – is special. Whatever version of this dish is offered to you in other places, having once tasted piti in Shaki, you will remember its taste for a long time.

It should be noted that in Shaki piti can be tasted in almost every cafe and restaurant, and almost everywhere it is equally tasty. 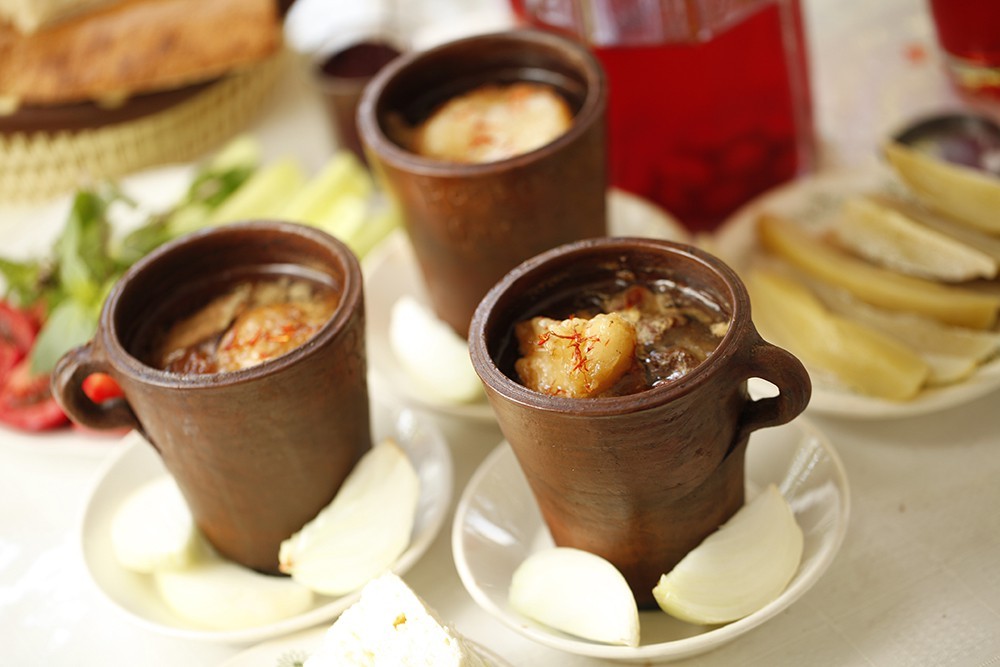 There are many variations of halvah (baklava) in Azerbaijan – Baku, Guba, Shaki and each have their own characteristics. Real Shaki halvah can only be tasted in Shaki. Painstaking work and cooking conditions limit the ability to cook it at home. The secrets of making real halvah are known only to those for whom the preparation of halvah is a family business. In Shaki there are several well-known hereditary “halvachy” – as halvah masters are called here. Any passer-by will indicate to their shops.

In addition to the Shaki baklava, we recommend to try other types of national sweets: bamiya, burma-halvah, tel-halvah, peshviang, nuts in sugar glaze, traditional “barama” caramel and much more. 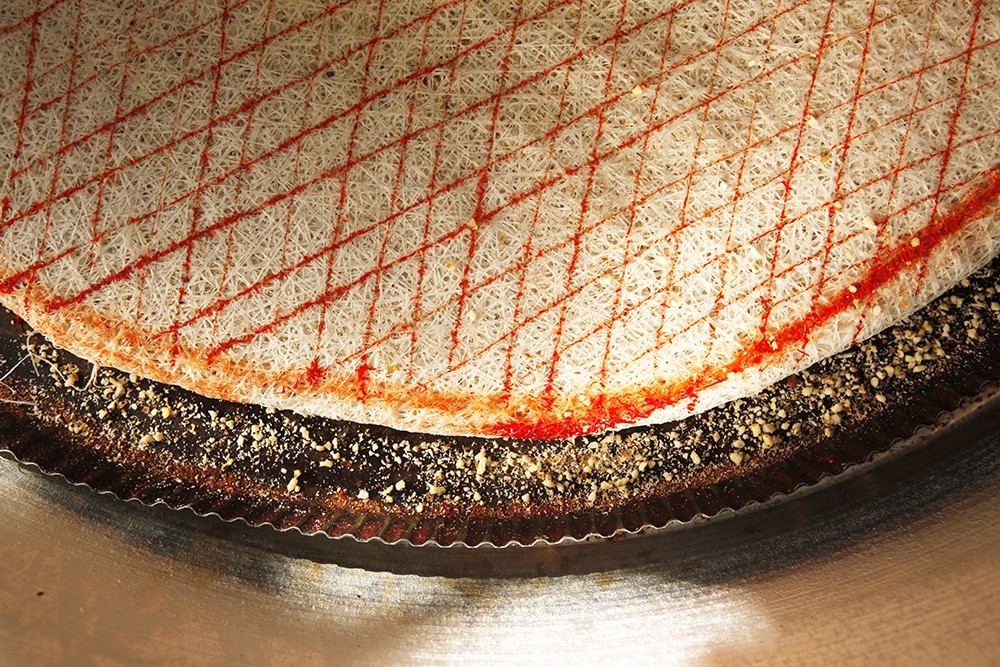 The Shaki Republican Equestrian Tourism Center is located in one of the most picturesque corners of Shaki, in the village of Dashyuz. The Center contains several horse breeds – Arabian horses, English racers, German trakenins, Alkhankan (Turkmen), etc.

Tourists have the opportunity not only to watch the games, but also to take part in them. Before that, they can be instructed by an experienced horseback riding coach or simply ride a horse. 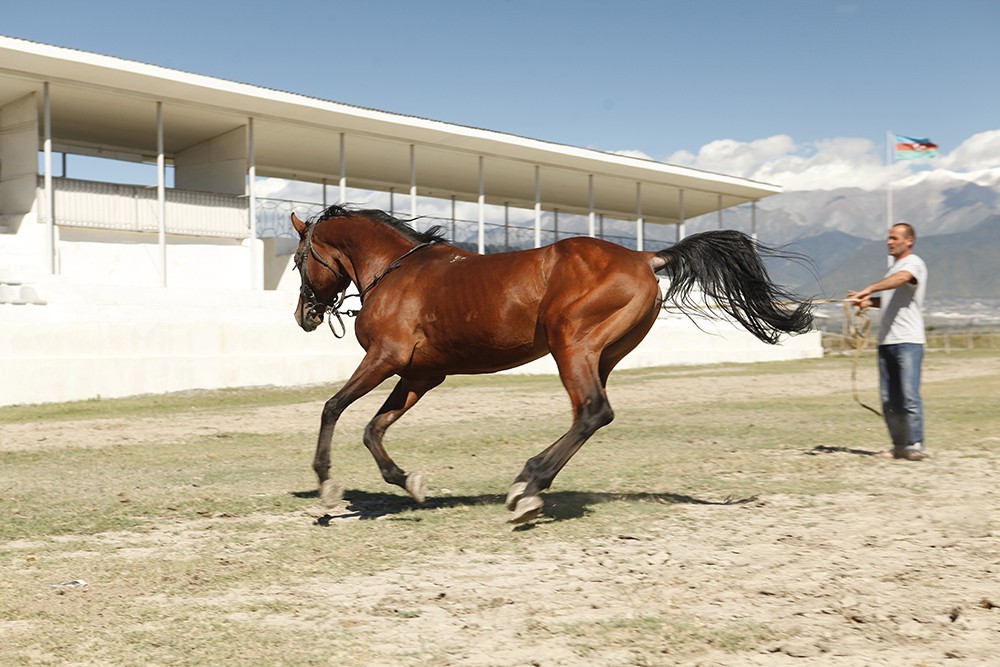 Stay in a caravanserai

Shaki Karvansaray Hotel is not only a hotel, but also one of the most intriguing sights of the city – the original caravanserai of the 18th century. This authentic inn is notable for the fact that it preserves the whole historical surroundings. The rooms have arched vaults, massive doors, impressive stone walls.

The hotel has a spacious courtyard with an ornamental pool and a garden, where it is pleasant to sit over a cup of fragrant tea with Shaki halvah. 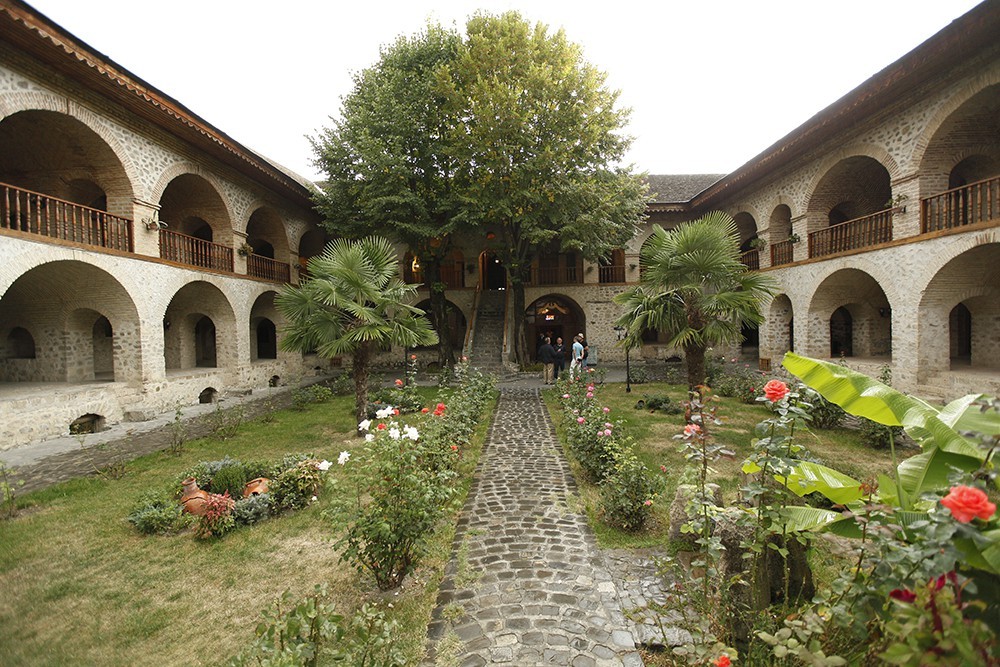